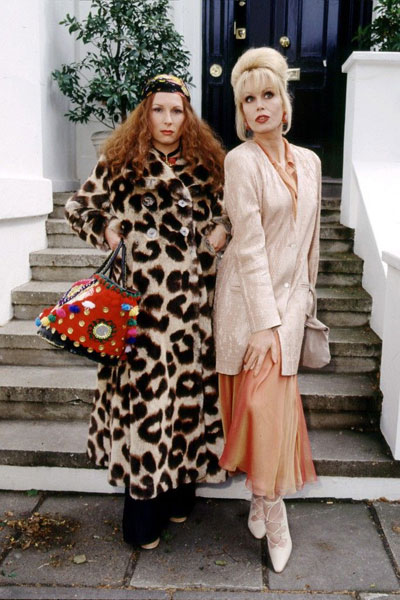 Will Vicky B, Kim and Kate join Eddie and Patsy’s squad?

If you love Absolutely Fabulous as much as we do, you’ll be practically waiting in the starting blocks to hotfoot it to the cinema in 2016.

And as if any further excuse was needed to see Jennifer Saunders and Joanna Lumley revive their iconic roles as Edina Monsoon and Patsy Stone in Ab Fab: The Movie, this week a whole host of A-List names has been added to the starry list of potential cameos.

While Saunders herself confirmed recently that supermodel Kate Moss is set to appear in the big screen version of the fashion satire, it has been reported that Victoria Beckham and Kim Kardashian West are also slated for cameos.

Vicky B has previously joint forces with the British comedienne for a Comic Relief sketch in 1997, as well as acting with her in pop culture classic Spice World, so we hope she can be swayed to show off her funny side again!

And Keeping Up With The Kardashians star Kim would fit right in with Eddie and Patsy’s jet set squad, right?

Meanwhile, Saunders told The Mirror of Mossy’s role, “It’s not yet decided whether she’ll have a speaking part or not, but she’ll definitely be in it. She’s a big fan of the show and we’re pals, so – aside from the fact she’s the definitive model – it was a no-brainer.”

Baby Spice Emma Bunton and singer Lulu are also said to be starring in the comedy.

Backstage at Markus Lupfer AW16 With Bumble and bumble

“The Markus Lupfer girl never sleeps, and Autumn/Winter 2016 caters for her 24 hour lifestyle without compromising on polish,” read the show notes for the designer’s AW16 collection. And so…