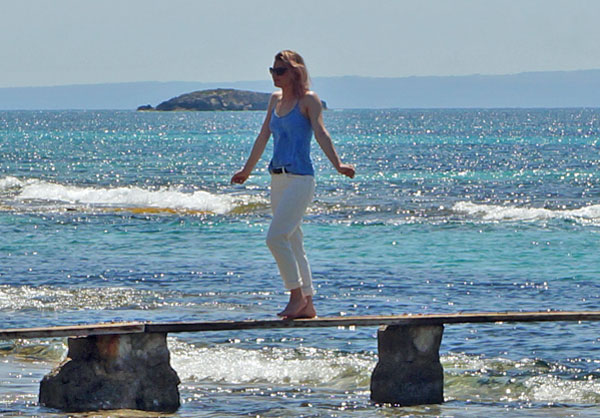 With its crystal clear waters and powdery white sand, Salinas beach has long been one of the most popular in Ibiza. Add to that a selection of chilled bars and upmarket eateries and you can understand why in high season this little stretch of paradise gets crazy busy. 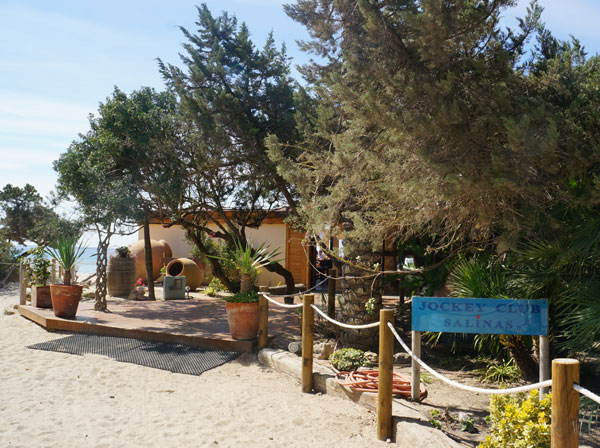 Nonetheless, it remains one of my favourite spots on the whole island. There is nothing better than floating in the shallow sea and listening to the tranquil Balearic beats drifting into your ears before grabbing a cold beer or crisp glass of cava when the sun starts to go down. 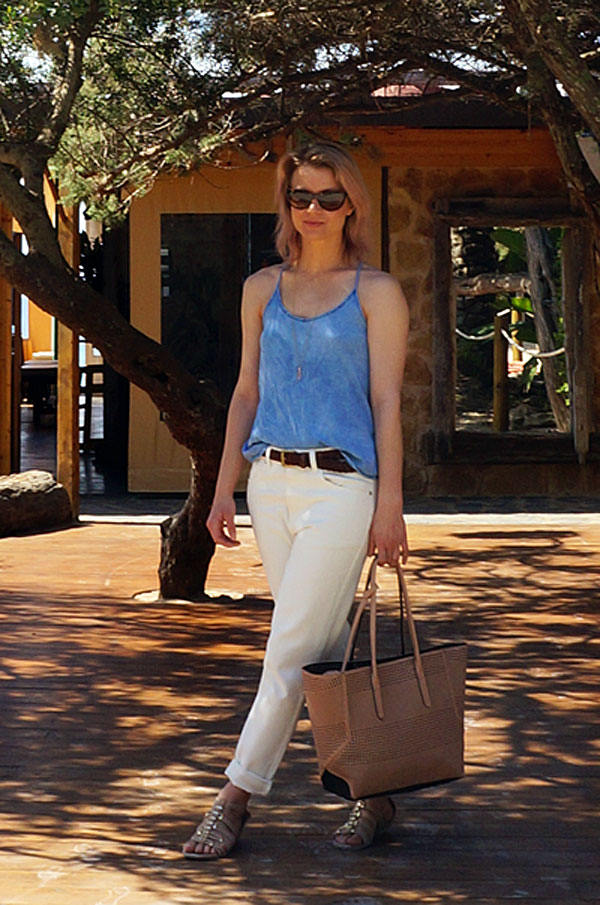 With that in mind, it made sense to rent an apartment nearby rather than in Eivissa – which is pretty quiet anyway this time of the year. I found the perfect hideaway in the hills overlooking the beach and the salt flats, a mere five minute drive (if that) from the sea.

This, in turn, meant that the famous Jockey Club Ibiza was my new ‘local’. Both Liz and I were hugely excited about this fact, because the beachside restaurant is one of our favourite hangouts on the white isle.

In previous years, we would meet on the shady terrace for a late lunch or sundowners but with the eatery literally on our doorstep we thought we would try something new and aim for brunch. And with party season still a while off, we were also a lot less hungover and stood a much better chance at making it out of bed in time. 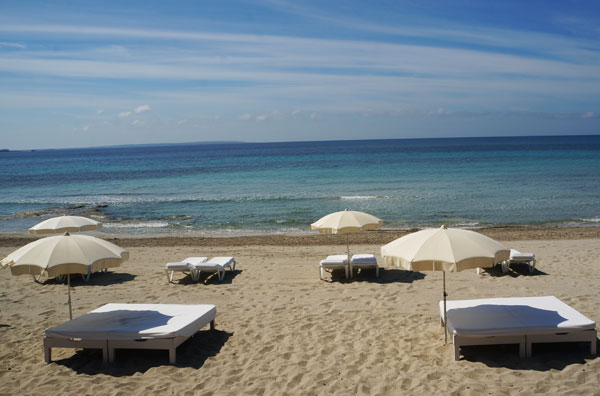 And we did! After a cocktail-fuelled dinner the night before, we were in dire need of strong coffee and a savoury breakfast. With no crowds to fight over tables with, Liz and I were seated in what is the beach equivalent of the Fashion Week FROW: a sunny, breezy spot as close to the sea as you can get without actually setting foot on the sand.

Our standard order for lunch is usually one of Jockey Club’s to-die-for salads (you have to try the tuna and salmon tartar with avocado and strawberries) and several helpings of pink cava, however, brunch called for Americano, juice and eggs. And water. Plenty of water. Breakfast of champions. 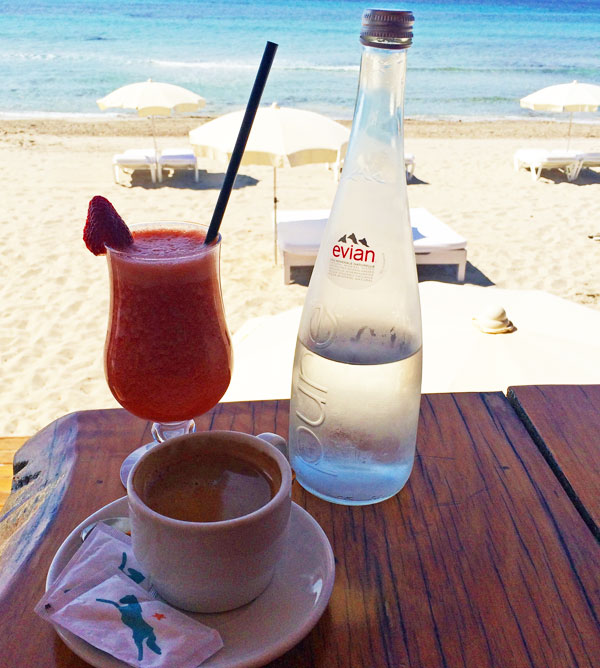 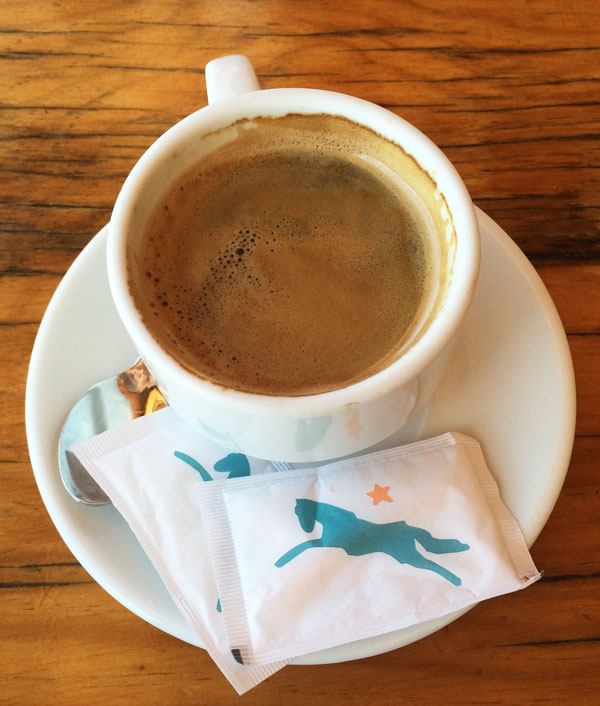 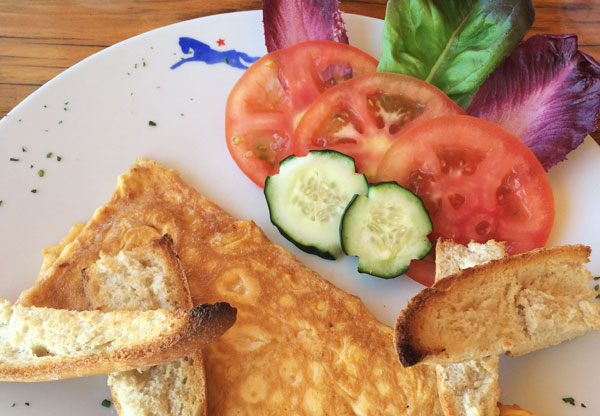 Tell you what was also a ‘different’ experience: getting properly dressed before hitting the beach. The mornings are still pretty chilly in April but when the sun comes out it can slowly heat up to a decent 24 or 26 degrees between lunch and late afternoon.

The Jockey Club is pretty chilled but still quite smart, so I thought it was the perfect opportunity to crack out my new ‘mom’ jeans. They are high-waisted, slouchy and super comfy, but if you roll them up they fall perfectly to a nonchalant effect and they look awesome with heels, too. I had considered white denim for a while and when I saw this pair by Liquor N Poker I had to snap it up. As always though, full outfit details are at the end of this post. 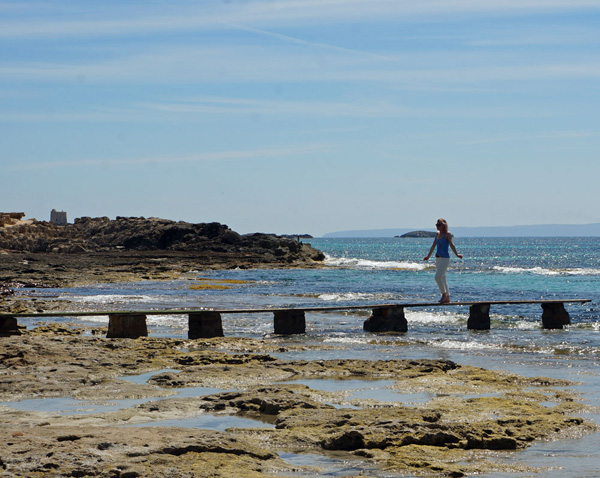 A lot more coherent after breakfast, once Liz and I had let our food go down we went for a stroll along the beach, passing the equally iconic Sa Trinxa sunset bar with its famous gangplank inviting you to dip a toe in the water. (I did. Too cold.) 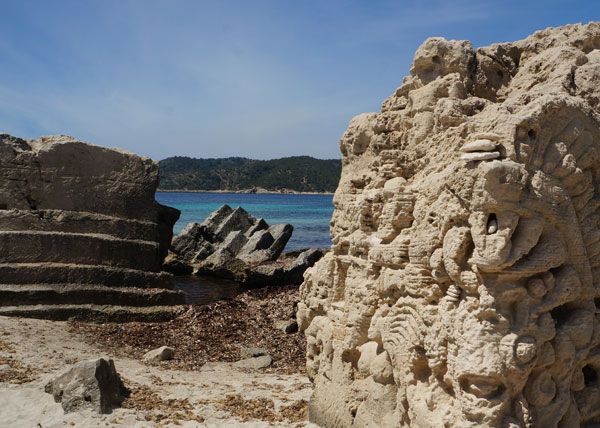 We soldiered on along the coastline, on a mission to get to the ‘pirate tower’ that marks one of the corners of the island and is just about visible from the beach.

On the way, we stopped to admire some stone carvings that had been etched into the rocks down by the shore and had to sit down several times to take in the stunning views across the sea. 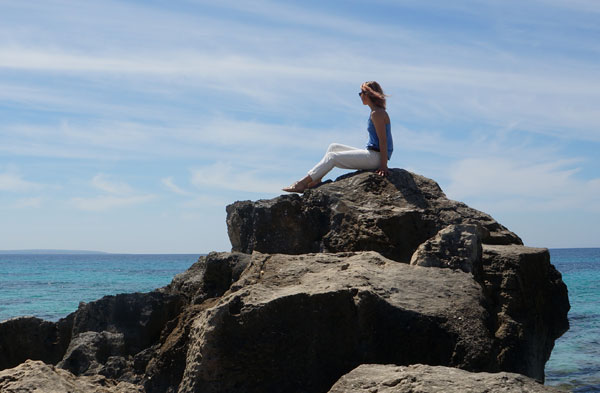 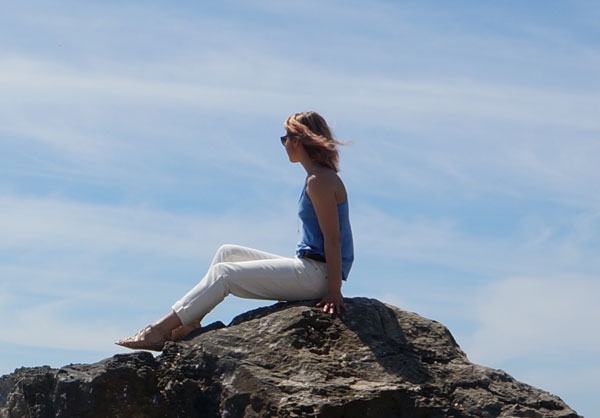 Should you want to follow our discovery trail, simple head left at Jockey Club and carry straight on past Sa Trinxa and you will eventually find the tower.

I should warn you, however, that you will have to pass through the nudist part of the beach and are likely to find more naked sun worshippers in the little coves between Playa Salinas and Es Cavallet. Just so you’re not caught by surprise! 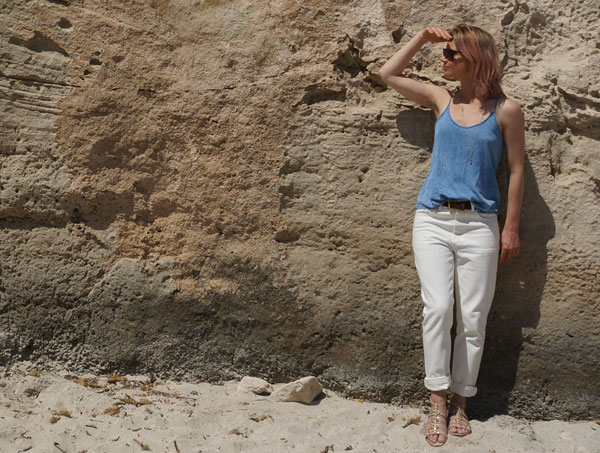 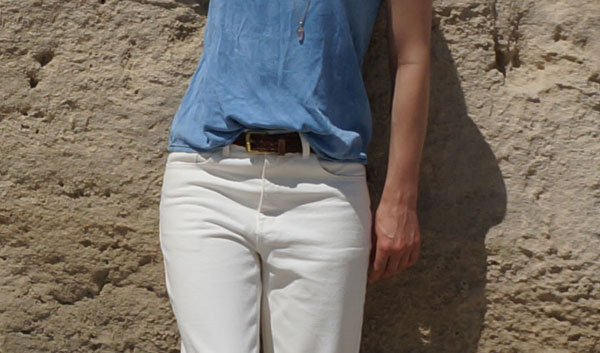 The scenery is tranquil and beautiful, but I would also recommend to wear something a little more solid than flip flops on your feet. I was fine in my flat strappy sandals, but the ground is a little rocky and if you want to climb on the odd rock it’s better to be safe than sorry, right? God, I’m really starting to show my age! 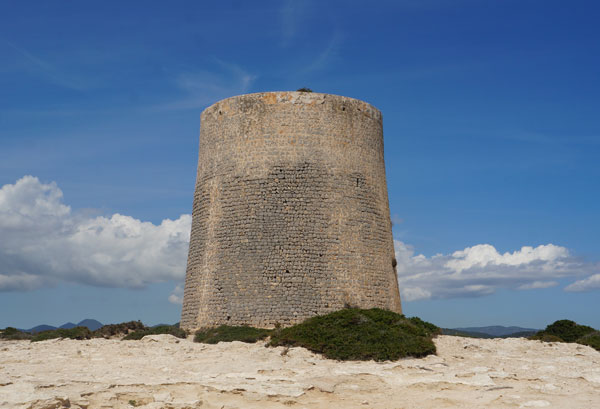 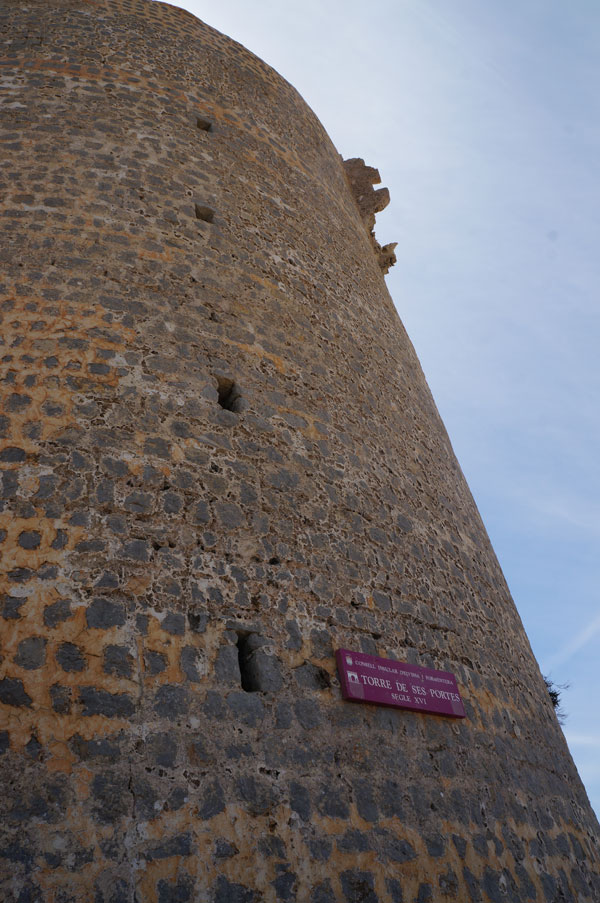 After what is around a half-hour walk – although it probably took us more like 90 minutes because of all the photo opportunities – we finally made it to the imposing Torre Ses Portes.

As with many iconic landmarks, we stood and admired it for a while… before starting to take silly pictures. I will spare you the many failed attempts, but you get the idea of what we were trying to do.

What culture vultures we are… 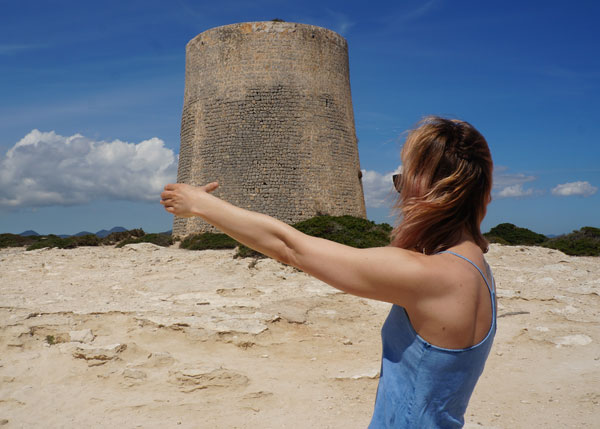 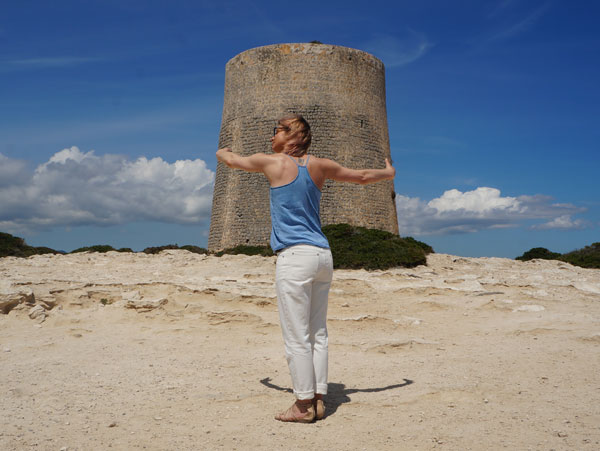 In a whirlwind four years, Cassandra Stavrou has seen her company Propercorn grow from a quirky, innovative start-up to a credible, much-loved food brand that has taken the UK by storm….