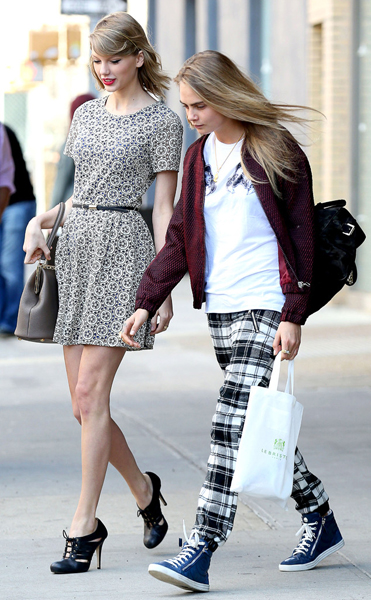 Shoshanna is about to have a major. freakout.

If reports are to believed, two hugely exciting cameo appearances could become reality in the fourth season of US sitcom GIRLS. Country superstar Taylor Swift, 24, and Brit model Cara Delevingne, 21, are both said to be interested in appearing in the next series of the HBO TV hit and have reportedly been chatting to the show’s creator Lena Dunham to make it happen.

“Lena’s been trying to persuade Taylor to appear in GIRLS for ages. Taylor loves the show and has agreed to a cameo,” an insider told British magazine Grazia. “Lena would also love her to take on a more permanent role and to pen some music for the show.”

Meanwhile, aspiring actress Cara is said to have been begging her producer pal to let her join the GIRLS cast. A source revealed, ‘Taylor told Lena that Cara is a huge fan of Girls. Lena immediately agreed because Cara is her girl crush. She has been in touch with Cara’s people already to discuss the idea.”

After recruiting Withnail and I star Richard E. Grant and J.Crew’s creative director Jenna Lyons for season three, award-winning writer Lena, 27, has admitted she would love to get fashion icon and designer Victoria Beckham involved in the cult sitcom.

She said, “I’d love to see her, like, dress it down a little bit, maybe do Victoria Beckham as somebody’s adult education teacher or something…”

We can’t wait to see what Lena has in mind for Taylor and Cara!

We thought Matthew McConaughey’s deliciously awkward chest-thumping ‘song’ in The Wolf of Wall Street was actually rather catchy even the first time we saw it. And it seems we’re not…