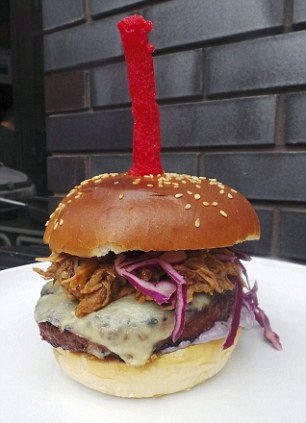 No Cream needed with the Purple Rain burger

Prince’s return to the stage earlier this year caused huge excitement amongst music lovers. And one of his fans was so thrilled about the musician’s comeback, he created a burger in his idol’s honour.

Chef Franco Sotgiu, who is already known for his unusual culinary concoctions, designed the Purple Rain burger –  named after one of Prince’s most iconic songs. Made with pulled rib meat, a six ounce chuck steak, bone marrow, purple slaw and a Little Red Courgette using died tempura sauce, the fast food homage went on sale at Manchester’s trendy burger joint SoLita ahead of the singer’s concerts in the city.

Franco said of the £13.99 patty, “We thought we would do something a little bit fun and tongue-in-cheek with Prince coming to Manchester. The cheekiest thing was putting the rib meat on because people have said he’s had two removed to give himself the corset look. We tried to get as many puns in as possible so it’s a bit gimmicky but it’s still a great burger. We wouldn’t put our names on it if it wasn’t good.”

The creative chef, who has previously thought up a haggis-based Andy Murray burger, was lucky enough to get tickets to see Prince in concert. However, he resisted bringing along a Purple Rain whopper for the star. He laughed, “Prince is a veggie so it’s unlikely he will want one.”

If you missed out on trying Franco’s foodie homage to The Artist Formerly Known As, there are still several unique burger creations on SoLita’s menu, like the Mac Daddy – made with a fried Mac’n’Cheese bun.

For more information go to www.solita.co.uk