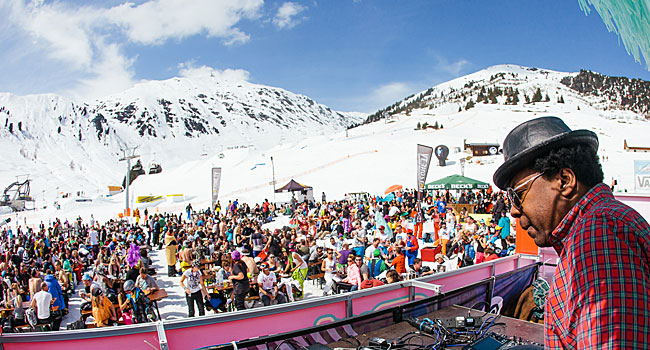 Music festivals are synonymous with summer. But how about swapping your wellies, cider and glamping gear for Moonboots, mulled wine and cosy lodges – with a top line-up of the world’s best bands and DJs, that is?

Some 15 years ago, Snowbombing founder Gareth Cooper had the genius idea to bring the party spirit of Ibiza to the idyllic white mountains of Austria, taking winter sports and après-ski to a whole new level of fun.

And thanks to its ever-growing popularity more and more winter festivals have sprung up over the years. So pack your best fancy dress outfits, limber up and get ready for the ride of your life…

Where: Mayrhofn, Austria
Fly to: Innsbruck
When: 4-9 April 2016
What to pack: Fancy dress and light jackets and jumpers. It gets hot on them mountains in April!

Prepare yourself for a week-long explosion of snow, parties, winter sports, fancy dress, beats, shenanigans and overall madness as the festival takes over the sleepy Austrian village of Mayrhofn for its annual extravaganza. Warm up on the slopes with an early morning aerobics session led by Mr Motivator before throwing yourself down the 500km network of runs in your best fancy dress costume. Watch your favourite DJs rock the Alps at one of the many lunch spots on the slopes, then settle in for some après-ski shenanigans before putting on your glad rags for a night to remember. Wander into the forest to watch the likes of The Prodigy take over the giant chalet stage or ride the world’s biggest and booziest cable car to the Arctic Disco – a massive party igloo 2000 meters above sea level. End the night in one of the many party lodges or underground clubs. Crash out… and repeat. repeat. repeat.

For more information go to www.snowbombing.com

This ‘fun-in-the-snow’ extravaganza isn’t so much about the music, but there’s still plenty of party to be had. With off-slope activities available to piste pros and novices alike – think mountain top yoga, slope-side hot tubs, a mini Oktober Fest – The Ski Week is perfect for getting all your mates together for one big knees-up in the mountains. How much you actually ski or snowboard is entirely at your discretion…

For more information go to www.theskiweek.com and read our full review here

Snowboxx is a less expensive option that offers a lot of bang for your buck. Boasting an international line-up of up and coming DJ talent, glorious sunshine and powdery snow perfection on the slopes as well as mountain yoga , pool parties and gondola karaoke, what’s not to love?

For more information go to www.snowboxx.com

Where: Portes du Soleil, France and Switzerland
Fly to: Toulouse
When: 13-19 March 2016
Pack: A hipflask

Less of the shenanigans, more of the music! Rock the Pistes offers alternative beats by acclaimed international and French artists such as The Klaxons and Babyshambles for those who love to rock out in the snow but aren’t fussed by fancy dress, games and karaoke. Still, with three gigs setting the hills alive every day, there is plenty to take in. The purist’s choice.

For more information go to www.rockthepistes.com

Hosting the annual British Snowboard and Freeski Championships, with plenty of freestyle demonstrations from the best UK boarders and skiers, this snow festival is for those who take their winter sports seriously. All the adrenalin-packed slope action is broken up by a solid music line-up that has seen a mix of live bands and world-famous DJs lead the apres-ski!

For more information go to www.facebook.com/britsfestival

Recycle Your Mind: Striking Beauty Images Show The Impact Of Plastic Pollution On Our Seas

Surrounded by some of the most beautiful and clear waters in the world, it’s impossible to think of Ibiza without dreaming of the glittering Balearic Sea. And with the global…