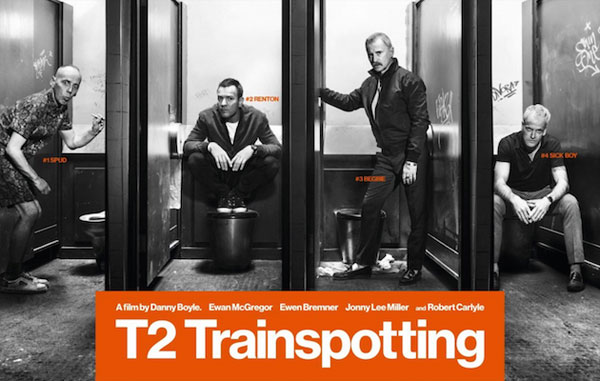 Boys are back in town…

Set to the haunting opening notes of Underworld’s Born Slippy – which somehow doesn’t seem to have aged since 1996 – the iconic Trainspotting voiceover has been given a #firstworldproblem update for the highly anticipated sequel to the cult movie.

The official trailer to Danny Boyle’s upcoming second instalment of the gritty Britflick has landed and it’s fast-paced and intriguing. Starring most of the original cast, Ewan McGregor (who has also aged rather well) and Robert Carlyle make a return to reprise their roles as Mark Renton and Begbie, while Spud (Ewen Bremner), Sick Boy (Johnny Lee Miller) and Diane (Kelly Macdonald) also make an appearance.

It’s been a rollercoaster few months for the British Royal Family and, following the bombshell news of Prince Harry and Meghan Markle’s abdication, it looks like 2020 is going to…

A blinding headache. The room is spinning. Just the thought of something fried makes you want to run to the bathroom. If you woke up on January 1st with the…

Is This The World’s Healthiest Green Smoothie Recipe?

Feeling in need of a serious injection of goodness? Whether you’re on a health kick or in recovery from a killer hangover, this super-charged green smoothie is your saviour. Dubbed…

New Year, New You: Everything You Need To Stick To Your 2020 Resolutions

As the sun sets on 2019, it’s time to reflect on what we have overcome, achieved and celebrated this year. Did you manage to stick to the New Year’s resolutions you…

Once you get your first hit of the exotic aromas of Palo Santo, it’s near impossible not to get addicted. Evoking scenes of mysterious jungles and nights filled with magic,…

Upgrade Your Spa Break With The Elysium Collection

Honestly, there are few days when we are not dreaming of a cheeky spa break. Whether you are in need of a bit of self-care or looking for a romantic…

Kendall kills it in US Vogue

Love or loathe her extended family, but Kendall Jenner has had a breakout year as far as her modelling career is concerned. From walking for Chanel, scoring a Love magazine…