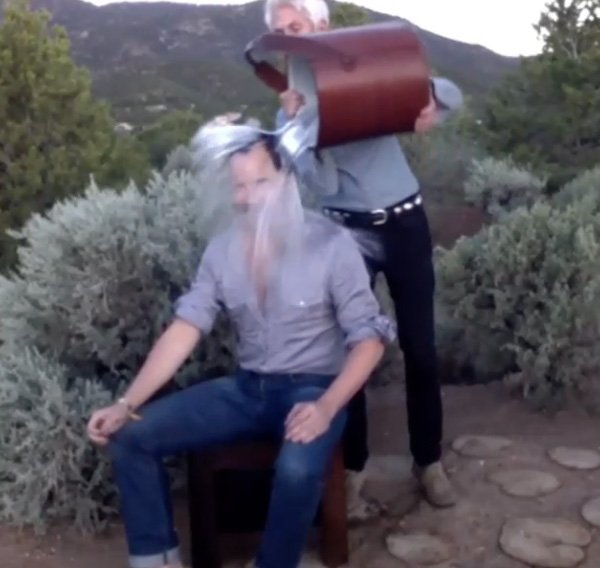 Just when we thought the ice bucket challenge hype was winding down, there goes Tom Ford and delivers what must surely be the chicest version of the fundraising dare.

Accepting a nomination from Victoria Beckham (whose own #icebucketchallenge clip was rather good too), the design icon gets drenched by husband Richard Buckley.

Except for TF’s video looks less like a spluttering mess and more of a beautifully lit, impeccably styled high fashion shoot, of course.

Just take a very close look at that very expensive (we assume) leather bucket that is being tipped over Mr Ford’s head. Right?

What makes this even more exciting are the high fashion peers the Texan designer nominated. He wrote on Instagram, “Thank you to @victoriabeckham for the #alsicebucketchallenge. Nicolas Ghesquiere and Hedi Slimane, you’re up next.”

As of yesterday, the social media craze had raised in the region of $80million to support the fight against Lou Gehrig’s Disease or motor neurone disease, as it is more commonly known in the UK.

For more information about the ice bucket challenge or to donate go to www.alsa.org/fight-als/ice-bucket-challenge or www.mndassociation.org

Credit: Image and video via Tom Ford on Instagram

A Winter Break In Mexico: Heaven Is Closer At Azulik Tulum

If you have ever dreamt of staying in a tree house, this one is for you! Azulik Hotel and Maya Spa in Tulum, Mexico, has become somewhat ‘Instagram famous’ after…