If Indian Summer is my favourite season, then Halloween is undoubtedly my favourite holiday of the year. And it has become a bit of a tradition for my friends and me to spend it at Alton Towers. With late night rides, terrifying scare mazes and hauntingly beautiful surroundings, a weekend stay at the resort is every mischief-loving roustabout’s dream come true. Being super keen, we had booked our stay all the way back in January and were really looking forward to the Scarefest weekend, so my friend Ben – you might recognise him from Bestival shenanigans – and I hopped on a train from London and checked into the resort for two days of rollercoasters and truly terrifying live action Halloween horror.

Upon arrival, we checked in at the Caribbean-themed Splash Landings Hotel, which had been transformed with season-appropriate pumpkins galore. Staying over meant not only that we didn’t have to rush around the park, but we also got our second day ticket for free – result! Set in a huge country park with its very own authentic manor house and surrounded by gloomy, fog-filled woods, Alton Towers would make the perfect location for Halloween any given day. But for Scarefest, the resort really goes to town and fills the park with colourful decorations and spooky characters, creating an eerie playground for grown-ups and children alike.

Now, I’m not the best with people in scary costumes. I love immersive experiences like Punch Drunk’s The Drowned Man or Philip Pullman’s Grimm Tales, but actors who specifically do their worst to scare you… nah. It took me many years to realise I’m not actually going to die during one of these frightful experiences and get to a level where I (secretly) quite enjoy it! That said, the Alton Towers Scarefest mazes are really not for the faint-hearted. Oh no!

This year, there were three different labyrinths; one of which I ruled out immediately because your group gets split up and you have to make your own way out and you literally couldn’t pay me. But I was quite excited about the other two, knowing how elaborate the productions usually are. We started with the Terror of the Towers, which leads you deep inside the walls of the Alton Towers castle whilst you’re set upon by a hybrid of spooky monks and Harry Potter style dementors – no copyright infringement intended. It was the second time I had done this particular maze, so I managed to keep my eyes open, erm,  pretty much all the way through…

By the time we found our way out, the sun had set and darkness descended over the park. Getting ready to cause some spooky mischief ourselves – and, in no way, to scare any children –  Ben and I had our faces painted at one of the stalls that are dotted around the resort. An improvement, no? With a couple of hours left to explore Alton Towers at night, we went to check out the two scare zones in the park where actors roam freely to haunt you. Venturing into the Forbidden Valley, we soon enough found them. Bathed in ominous red and blue lighting, the area was filled with smoke and the screeching noise of alarms going off. I did my best to avoid a chainsaw-wielding mad man, while poor Ben, although not really fazed by it all, got chased all the way up a hill by a particularly keen zombie!

After hours of frightful fun, we headed back to the hotel where we refuelled with a huge pizza and a strong cocktail. With our scary face paint still intact, we got changed and did a fair bit of tricking – and maybe not so much treating – around the hotel. What exactly? That would be telling, wouldn’t it? Maybe join us next year and find out for yourself…

For more information and tickets head to www.altontowers.com. 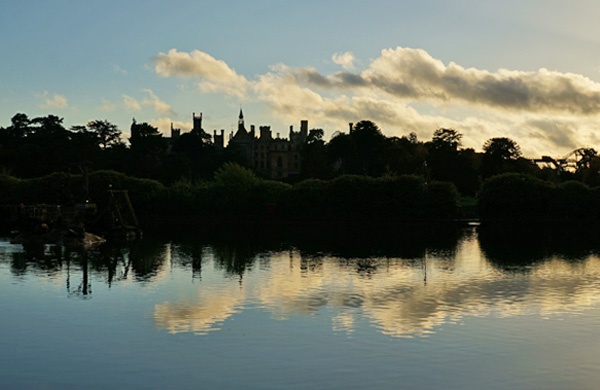