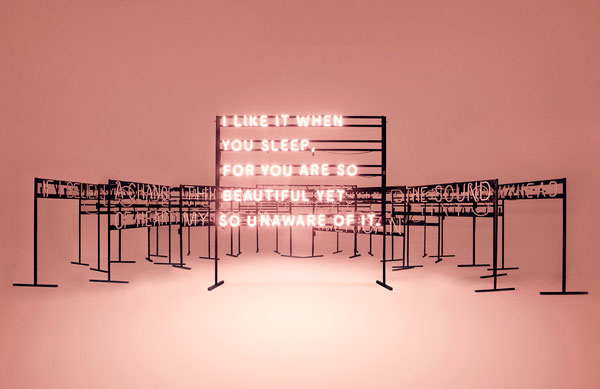 As much as January gives us the opportunity to start afresh and better ourselves with a host of New Year resolutions, it can also seem a little bleak with its (mostly) rubbish weather, our self-induced seasonal skintness and intentions to forsake all our favourite vices.

So it’s time to get some dates in the diary to make you excited about the year ahead! We have rounded up the fashion collaborations, gigs, movie releases and cultural events to look forward to in 2016…

Lumiere London, the capital’s first festival of light, will see parts of Mayfair, Piccadilly, Regent Street, Trafalgar Square and King’s Cross all closed at the same time to show off illuminated pieces of art. Produced by Artichoke, one of the UK’s largest creative companies, some of the exhibits carry an important message – for example Trafalgar Square’s fountains will be littered with plastic bottles that will shine brightly to highlight the damage being done by rubbish dumped in the Pacific Ocean.

A fashion and music double-whammy, RiRi is clearly bored of laying low and hits us with not only her new album ANTI but also her first collection as creative director of Puma. The pop culture maverick is set to show her designs at the New York Fashion Week AW16 shows.

Just in time for Fashion Month, the fiercest movie sequel of them all hits cinemas in February with cameos from Macaulay Culkin, Ariana Grande and Justin Bieber to name just a few. Time to practise your best Blue Steel model face…

We have listened to the Manchester band’s atmospheric, genre-busting first album – and pretty much all their other previous releases – so much by now, we reckon we could stand in for frontman Matt Healy. So it’s high time we get some fresh The 1975 material, and thankfully we only have to wait until February for our first fix. The epically titled second album I Like It When You Sleep, For You Are So Beautiful Yet So Unaware Of It is slated for release on the 26th of the month, followed by a UK tour starting on March 5th.

Raising it’s crowd-funding target of £500,000 in just eight days, popular nineties cult show The Crystal Maze has been turned into an immersive experience set to open in London on March 15th. Teaming up with the show’s original host Richard O’Brien, organisers have created four game zones to be tackled by groups of eight before ending in the famous Crystal Dome. With huge demand for tickets, the experience is anticipated to stay open for at least three years.

Over a year after the initial hysteria-inducing announcement that Queen B is designing an athleisure collection for the high street giant, it has been confirmed that Mrs Carter’s clothing, accessories and footwear designs will hit shelves in April.

We didn’t see this ueber-cool collaboration coming, but we are SO excited it is happening. Landing in stores on a yet TBC date this spring, Kate and Laura Mulleavy bring their dreamy California vibes to cool girl high street brand & Other Stories.

The cult TV series is given a movie-length makeover with more amazing cameo appearances than you can shake a bottle of Bollinger at! As well as bringing back the inimitable Edina Monsoon and Patsy Stone; Cara Delevingne, Kate Moss, Kim Kardashian West, Joan Collins, Rebel Wilson and former Spice Girl Emma Bunton are all credited to appear when the movie hits cinemas on July 1st.

Is this the grand Manhattan love nest of Mary Kate Olsen and Olivier Sarkozy?

We always expected style icon turned fashion designer Mary Kate Olsen’s home to be the epitome of glamour, but nothing could have prepared us for the sheer scale of luxury…