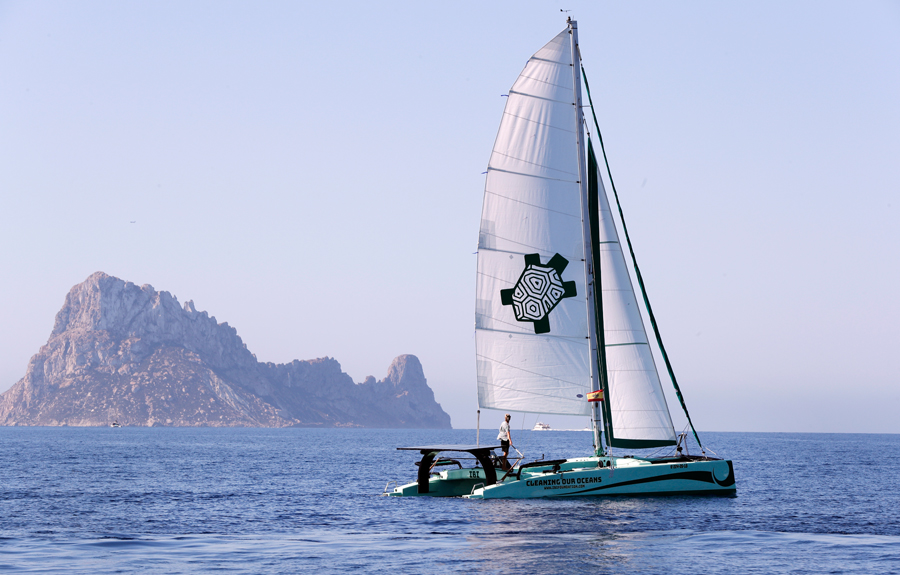 The bright orange lemonade can is easy to spot as it bobs up and down on the waves. The flash of colour from its iconic packaging forms a stark contrast to the deep blue and bright turquoise shades the Balearic Sea is dazzling us with on this hot August afternoon. Leaning out from the boat as far as I can, the net of my handheld ‘catcher’ skims the floating piece of rubbish before I manage to secure it with a final stab at the sea.

‘I got it, ‘ I shout triumphantly, before tossing the can into a rubbish bag resting on the floor of the vessel, which is already half-full of random debris and plastic waste we collected earlier. Fishing garbage out of the sea is an oddly satisfying experience, it turns out.

We are spending the day as volunteers aboard the ‘iBi’, one of the world’s first solar-powered ‘ocean clean-up catamarans’.  The turquoise vessel – easily recognisable thanks to its majestic white and green sails, both adorned with a giant turtle – belongs to the iBi Foundation, an environmental organisation with the mission to save our oceans from plastic pollution.

The idea for the eco charity was born in the summer of 2017, when founders Ed and Joke Pronk found a struggling sea turtle caught up in plastic rubbish during a boat trip off the coast of Ibiza. They carefully untangled the marine creature, naming it ‘iBi’ before releasing it back into the water. Freed from its constraints, the turtle swam off into the wild, but the encounter left a lasting impression on Ed and Joke. Coming face to face with the effects plastic pollution has on the vulnerable wildlife that inhabits our seas, the desire to facilitate change inspired the two Dutch entrepreneurs to create the iBi Foundation.

The much-loved stretch of the Mediterranean known as the Balearic Sea seemed like the natural place to start. In the beginning, the team used simple handheld nets to fish plastic out of the water. Ed says, “Although we were making an impact, it was slow and it was difficult to keep on top of all the waste. We started to think about a quicker and more efficient way to do this, and then we met La Bella Verde and their solar-powered catamarans!”

New research conducted by scientists and industry experts for The Pew Charitable Trusts and SYSTEMIQ has estimated that by 2040, 600 million metric tons of plastic will float around our oceans – almost tripling in volume over the next 20 years. The number is truly mind-boggling, with the Covid-19 pandemic reportedly setting back environmental initiatives considerably. Yet, even the smallest of actions is better than nothing and thanks to a rising awareness regarding the pollution in our seas, efforts have increased to protect this delicate ecosystem.

In 2018, the Balearic government announced a plan to ban the sale of single-use plastics such as straws, food-packaging trays and shopping bags, with the aim of becoming plastic-free by 2023. To help achieve this goal, iBi Foundation works closely with Plastic Free Ibiza, Ibiza Preservation Fund, Noctiluca Asociación, LBV Foundation and World Cleanup Day. Sailing five days a week, the ‘iBi’ scours the coastline of Ibiza for patches of floating rubbish. Commandeered by captain Luis, who joined the team in October 2019, the catamaran filters waste out of the sea via a unique net system that is attached to the solar-powered vessel.

It has the capacity to cover 22.224 m2 every hour, whilst filtering 11.112 m3 – the equivalent of 4.4 Olympic swimming pools. The filters work at 0.5m below the surface, collecting pieces of plastic as small as 2cm up to a maximum of the entire boat’s width. Paired with the 100% emission-free La Bella Verde catamaran design, the construction won the prize for Best Start-Up at the Barcelona Boat Show in 2019.

“The largest piece of rubbish we have recovered from the sea so far was a fuel tank,” Luis tells us. Up to four volunteers at a time can join the experienced captain aboard the ‘iBi’, which sets off from the harbour of San Antonio. The route differs every day, depending on the direction of the wind and where Luis expects the currents to push the plastic waste. On windy days, it’s harder to find patches of rubbish as the churning waves swallow them up, hiding them from view.

We set off at the leisurely hour of 12.00 noon, though meeting times can be scheduled as early as 10am depending on the weather forecast. Luis shows us around the boat, explaining where we can sit and warning us not to step onto the rubbish collection nets. He also assures us that the sturdy vessel sways much less than other boats of this kind, so those with a tendency for seasickness need not to worry. We connect our photographer Isa’s mobile phone to the wireless speakers so she can soundtrack our trip – this is Ibiza, after all – and sail out of the harbour to the mesmerising beats of Satori.

Gently floating along, we pass famous sights including Café del Mar on San Antonio’s Sunset Strip, Hostal La Torre on the cliffs of Cap Negret and the rock formation of Ses Margalides below Las Puertas del Cielo. Looking out for floating rubbish, we direct Luis towards the plastic waste while trying to catch rogue pieces with our handheld nets. It’s a chilled, peaceful ride with breathtaking views.

Tempted by the incredibly beautiful and clear waters of the Balearic Sea, we stop for lunch (please make sure to bring your own drinks and picnic) and a swim break in front of a secret cove we have uncovered. Luis puts up a tent-like cloth structure to protect us from the merciless August sun, and we relax for a while. The snorkels come out, however, an underwater armada of stinging jellyfish stops us from getting too carried away and we soon resume our mission.

With ‘golden hour’ approaching, we eventually begin our return journey after almost six hours on the water. We enjoy our last moments as ‘iBi’ volunteers by lying down on the nets at the front of the catamaran, flying across the waves with the water just inches below us. It’s been an educational and inspiring day, and we start to make plans for our next plastic clean-up sail before we are even back on dry land.

Want to help? You can apply to become an ‘iBi’ volunteer by emailing volunteer@ibifoundation.com. The iBi Foundation is also currently raising money to continue their important work via gofundme. Stay up to date with the latest ‘iBi’ news via www.ibifoundation.com or Instagram, Facebook and LinkedIn.

Fashion In An Age Of Technology: Watch The Met Ball 2016 On Instagram

The annual Costume Institute Gala is pretty much on par with the Oscars in terms of exclusivity, and unless you are some sort of fashion player, married to Kanye West or…