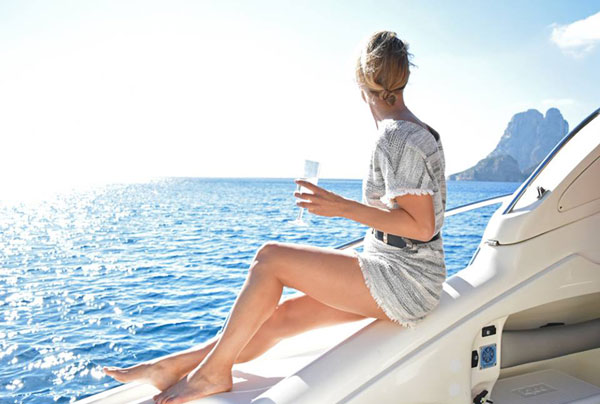 Island life… It’s as awesome as it looks.

Moving to Ibiza is a ridiculous fantasy, right? Or is it…

In March 2016, I left London and my job as an Online Editor to live and work in my favourite place in the world. Sacking in city life and moving to Ibiza a little bit extravagant for someone coming from a traditional German background, but I took a leap of faith and island-hopped from England to the Balearics. And more than five years later, I am still here!

After working ‘the season’ between April and November as a reporter for several Ibiza media outlets for four years, I am now based on the island year-round. So if you’re dreaming about doing the same, let me assure you it is entirely possible. It’s not always easy or straight-forward, but if you put your mind to it, it’s definitely an achievable dream. Here, I share a few useful – and random – bits I learned along the way that might be helpful…

The Early Bird Gets The Worm

With the season beginning earlier every year, don’t leave it too late to apply for your dream job. Many companies start recruiting for the following season at the end of the current year, so keep an eye on social media for vacancies or send an email on spec around October time. There are also several Facebook groups for island residents where people post job opportunities.

Learn Spanish In The Winter

If you’re not already speaking Spanish, it seems to make a lot of sense to learn it from the locals in Ibiza, right? You’ll have so much time to practise while out there! Erm, no. Unless you’re self-employed and able to set your own work schedule, you’ll be run off your feet from April until November. With the very best intentions, I started out having three Spanish lessons a week – from the comfort of my home – only to realise that I had zero time to practise or do my homework in between work appointments. Of course, a lot of the locals speak English but showing that you are at least trying to learn the lingo is hugely appreciated. So get started before you head out to the island to hit the ground running when the season starts!

While nowhere can beat London in terms of ridiculous rent prices, accommodation in Ibiza is famously expensive, too. The real glitch though is the deposit. Many landlords now demand as much as a whole season’s rent in advance after making bad experiences with people trashing their places or disappearing halfway through summer. Some jobs offer a ‘worker’s package’ that includes free accommodation, so it’s worth checking if this is included in your contract – or, if not, whether this can be negotiated. Again, the residents’ Facebook groups are a good place to look for ‘word of mouth’ accommodation. And once you have made contacts on the island, there is always someone who knows someone with a spare room – or even a villa to house-sit!

You know all those times you swore at TFL about their rubbish service? You’ll soon be missing London’s transport system dearly. There are no trains or trams on the island, and the bus service is sparse and a tad glitchy. The route from Santa Gertrudis at the heart of the island to Ibiza Town, for example, operates one coach roughly every 1.5 hours and finishes some time around 7pm. Invest in an old but safe runaround, as cars seem to get scratched every five minutes thanks to Ibiza’s chaotic approach to parking. Oh, and another thing – keeping a car battery charger or jump leads in your boot is a good idea. Ibiza residents have a penchant for forgetting to turn off the lights, draining the car battery and leaving them stranded.

Ibiza Has Its Own Time Zone

Time operates differently on the White Isle. Thanks to the glorious, seemingly endless sunshine, Ibiza enjoys more daylight hours than your average European location and everything tends to happen around two hours behind the UK schedule I was used to. Lunch starts around two or three in the afternoon and can last up to four hours. 7pm basically still counts as the afternoon, and no one goes out for dinner before 9pm or 10pm. If you get home at midnight, it is considered an early night. And don’t even think about heading to a club before 2am – you’ll end up awkwardly standing in a big, empty room.

The heat. The Crowds. Or, as the spiritually-minded believe, the energy generated by the thousands of visitors that frequent Ibiza in peak season… Whatever it is, come August 1st it’s like someone flicked a switch. Crazy things just… happen. My first-year August shenanigans started with me finding a random – and highly incoherent – woman sitting in our company car when I was about to drive to a work event. She believed it was hers and refused to get out. After having to get both the police and ambulance service involved, I arrived at the party I was meant to write about two hours late – only to find out it had been cancelled. August madness is a real thing, so be prepared for lots of strange things to happen. Stay calm and go with the flow, some of them you will hopefully be able to laugh about in the future!

Ibiza has famously been the home of hippies and artists for many decades, so the number and variety of alternative therapies, spiritual events and ‘new age’ schools of thought you’ll encounter is endless. Crystals, tarot, yoga, sound massage, kambo, ayahuasca… You name it, it’s out there! If you’re a sceptic, try to stay open-minded and attend one of Agroturismo Atzaro’s  or Pikes Ibiza’s spiritual festivals – at the very least, you’ll have a lovely afternoon in the gorgeous grounds with good food and music, and learn about some fascinating new things.

Ibiza is widely known as the clubbing capital of the world, and yes, temptation lurks at most corners. But, with many seasonal jobs requiring their staff to work a six-day week and irregular ‘Ibiza hours’, if you don’t want to risk burning out halfway through the season you have to learn how to pick your battles (which parties are worth working with a hangover the next day?), moderate yourself (not every night has to be a huge one) and how to say ‘no’ (seriously, when a night in is as rare as gold dust, you have to turn down at least some invitations). And be careful of the infamous ‘Ibiza kidnappings’, when you end up getting ‘held hostage’ by mischievous hosts or friends who won’t allow you to leave!

Before you move out to Ibiza, you’ll also have to consider that not all jobs allow you to take a holiday during the busy summer season. This might mean that you can’t leave the island between the months of April and November, which is hard if you suffer from homesickness or are leaving behind a significant other. At the same time, I found that around mid-August, I started to get ‘end of season panic’ when I realised summer isn’t actually endless. As much as I was looking forward to seeing all my friends in London and my family in Germany again, I massively freaked out when it came to leaving Ibiza. But, winter time brings the opportunity to recuperate from the madness, see your loved ones and travel – which is why I pretty much hopped straight on a plane to Tulum, Mexico after my first season. It’s a strange life, but if you’re a free spirit at heart you’ll love it!

Are you moving to Ibiza? Let me know how you get on via Facebook or Instagram. Good luck!

Victoria Beckham: ‘I don’t shave my legs and run four miles a day’

She is the picture of stylized, high-octane glamour; an international icon who has transformed herself from a somewhat garish 90’s pop sensation to a sophisticated, respected fashion designer. And it…